← Googlin’ Around
Googling myself! →

Googling Myself on the Internet

I have not searched myself on Google for quite some time, so I was very interested to see what came up as of recent.  It was funny to me, because the links that appeared were from my college experience, and not so much high school and below like it used to be.  Way back in the day, there were links to community service events that I did, my Bat Mitzvah announcement in the paper, or groups in which I took part in.  Firstly, my Facebook link was at the very top of the page.  This was really interesting to me, because I’m sure in today’s day and age Facebook is so important in our lives that it would come up first.  I also happen to know from past knowledge that Google puts websites that pay the most at the top, which made me wonder if Facebook paid to be first on the search. 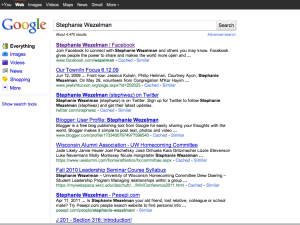 After that was a link to a high school group I was elected to, and after that was my Twitter account.  This really was eye-opening to me, because it further proves how much social networking is a key factor in everything that we do.  Google is making it known to whoever is searching me that I am in constant communication with people in my life.  The other things that came up was my involvement around campus, and announcements where my name has been included.  Also, class blogs and discussions I contributed to in past years.  After that, was websites I had never even heard about before.  It had my name on “search your friends” websites, indicating that I have accounts made from websites that gather information.  On Images, there were pictures of me from years ago, as well as pictures that were not of me, and had nothing to do with me.  Pictures from newspaper articles, staff pages for my job, and more were on this page. This was interesting to me because I didn’t know so much about myself was accessible on the Internet.