Just when I was positive I had conquered everything Tumblr related and there was nothing left to write about, I was surprised again by some really cool features that I had not yet discovered. Because there is a large list of websites I visit everyday already occupying my Firefox’s bookmark-toolbar, I was excited to learn that Tumblr has a “Bookmarklet” feature. This allows me to drag the “bookmarklet” button to my bookmarks bar so that I can easily click the button to post material to my tumblelog from whatever site I may be visiting at the time. This feature is common among collage websites such as Polyvore that I have used for my tumblr, Beauty and the Badger, to create virtual collages however I had no idea Tumblr had an option similar to this one for itself. Once I dragged the “Share on tumblr” bookmark to my toolbar, I could browse the web and easily click the button to upload the link to my tumblelog without having to even open a separate tab or window for tumblr itself. A little box appears asking me if I would like to post the link with a description and once I click okay it’s uploaded!

Another cool feature very relevant to our recent discussions about copyright laws and the internet is the Feeds feature. Feeds allow you to import posts from as many as 5 sites you may use other than Tumblr but the material imported must be your own. Tumblr is extremely strict on this rule when it comes to Feeds, and an importation of content that is not your own will lead to an immediate suspension of your tumblr account. While this obviously limits the feed feature, it is Tumblr policy to protect the copyrights of others.

Tumblr takes pride in the fact that they have made posting to your tumblelog as easy as possible. While the Bookmarklet seems to be an incredibly fast way to post, Tumblr has not stopped there. For people who still use AIM (AOL instant messenger), TumblrBot can be added to a buddylist to ensure content can be posted through a simple IM and for those who have a MAC laptop, there is Tumblet Widget option. This allows you to download an easy access Tumbler Widget to your Mac’s dashboard for posts coming directly from your desktop. From iPhone, to Blackberry and even the Android, applications and computer features are always accessible for download to making posting content faster, easier and therefore more effective!! 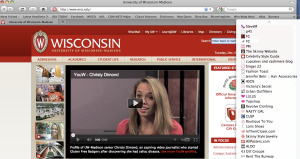 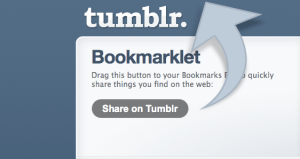 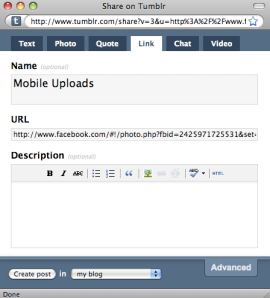