Hi everybody, I’m presenting on my social review site tomorrow in class. I’ve been sick with the flu, but I will post more follow-up blog entries soon. I have been spending time on Epinions.com, a consumer-based website that provides opinions and experiences on products and services.

It is adult-oriented, in the sense that the community as a whole appears to be well-educated and admimant about keeping the setting helpful and formal. Posts are required to be neat in spelling, grammar, no profanity, etc. Based off of a review on a board game, I decided to purchase it since I live right by a game store on Mifflin. I’m not prone to playing board games, so I thought that it would be interesting to leave my comfort zone and try something new to add to my experience with this project. It could have been boredom from being sick, but I ended up having a positive experience so I bought a similar game and wrote my own review on it. I am working on building my ratings, but since the website is in a forum-type format where communication is rather indirect than instant, I just have to write a lot of reviews and hope that someone stumbles across them. I will elaborate on the interactive aspects in my presentation!

Here are some questions to think about while I present:

Do you think that posting your opinion of something (whether it is a review site, Youtube, or a Facebook picture) contributes anything, whether it is long or short term?

What type of people do you think benefit from opinions posted online?

This post is a little late because I’ve had the flu, but I did Google myself over the past week. I didn’t find myself, but I did find a couple other interesting people with the same name. The first result was another woman’s Facebook profile, who had mostly private information. However she was willing to show the public her interest in Sex and the City, stoolball (?), and walking the dogs. Another Anne Leahy was a freelance writer and sign language interpreter. There is a more famous Anne Leahy that is an ambassador to the Holy See, which I found to be the most interesting. Coincidentally, another Anne Leahy produced a documentary called Peter Jennings Reporting: The Search For Jesus (2000)...which is also ironic since I don’t consider myself religious.

I never did find myself, but I am glad that other women occupy the top searches of my exact name; like most people, I already receive a lot of strangers’ Facebook requests which always weirds me out. I’m content in remaining anonymous to most wandering Google-rs looking for information on the ambassador to the Holy See.

I got what I expected while browsing Myspace. As a former user, I thought it to be nostalgically amusing albeit unsettling. When I deleted my account, users were just starting to get into sparkly .gif posts on their page, as well as HTML layouts that gave theirspace a more personalized flair. I noticed that there were a LOT more girls/women then boys/men on Myspace currently, as opposed to before when I felt like my friend list was an even ratio. There was a fair amount of profiles that disclosed a lot of personal information, and there were a lot of weird sparkly icons that quoted hip-hop artists. And let’s not forget the pictures where the user’s best assets were shown off (boobs).

I could say that there is some sort of hierarchical difference between Myspace and Facebook, but in the end they’re both websites where you can put virtually anything that you feel expresses yourself. They’re both websites where you can make yourself as perfect as you want to be portrayed. They’re both venues through which narcissism is pretty socially acceptable, on some sort of level. I can’t hate on Myspace users too much, because I have a Facebook. While I can say that I like to keep in friends who are far away, I also like that I get my own online space to post pictures or communicate easily with anyone. Myspace doesn’t seem private, but Facebook started out as a college student network, and now anyone can join. Also Mark Zuckerberg supposedly owns your photos and could sell them (I’ve heard and read both sides to this, but either way, it IS personal information posted on the Internet). And pictures of really drunk people are pretty unavoidable on either site. My overall view after viewing random Myspace profiles remains the same; I feel that people have different preferences, and there are people who just feel more comfortable with one site than the other.

History of the Internet

Today’s lecture made this video a little easier to understand. But, like some other students that posted, I had a little trouble keeping up with all of the terminology. I had no idea that the origins of the internet date back to 1957. Learning about the historiography gives me the impression that at the time, developing the internet resulted in a lot of researchers feeling like they were on the verge of something incredible. Once the distributed network was configured, the rate of developing innovations appeared to have sped up. It’s impressive how this momentum has continued throughout the past five decades; I remember trying to call my friends in elementary school on the land line in my household, but their line was busy because they were surfing the web. Now it is nearly impossible NOT to get a hold of someone. You would have to make a conscious effort – ignoring your text messages, ringing cell phone, Facebook chat windows, Skype session invitations – to escape from the hold that the technology has on us. The progression of the internet has definitely increased our accessibility, and our accessibility to it. Every year, something even better, even faster is on the market –  it’s fairly affordable and reliably entertaining or “cool”. Watching the History of the Internet video made me appreciate the people that made the internet and relevant technology so easily available to me. 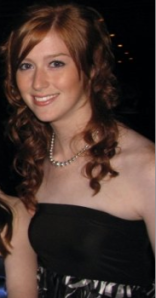 My name is Anne Leahy, and I usually go by Annie. I grew up on the South side of Chicago with four older siblings. I’m a junior geared towards a double major in French and Communication Arts. Artistic expression has always been a huge part of my life. I did Irish dance for 11 years – going to the Regional, National and World Championships.Now, I mostly do ballet, jazz and African. I’ve played piano since I was five, and even did musical theatre for a couple of years. My other hobbies include running, reading books, trying to play other instruments, traveling to new places, watching football, and (of course) spending time on the internet. I would like to go into film production / editing someday; I enjoyed performance, but now I would like to learn what it’s like behind the scenes. I also have a vast curiousity in the inner-workings of the Internet, which prompted me to take this class, and I hope to learn as much as I can.