After being slightly discouraged from Chathour, I decided I needed to return and play along a little in order to get anywhere in my research.

The variety of chat rooms is quite interesting, there are user-created chat rooms such as “friendly chat” or “emo chat.”  There are also chat categories like “Lesbian chat”, “Asian chat”, “Music chat”, “New York chat”, “Christian chat”, “Heartbroken chat”, etc.  One could have access to any of these chat rooms, as long as you behave yourself and aren’t kicked out (yes, you can be kicked out of a chat–I know from experience).  People can post chats that they created in already existing chat rooms, to invite people to a more exclusive chat. 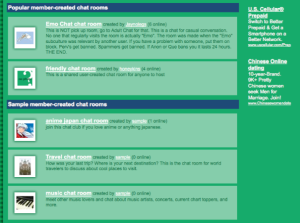 When testing new chat rooms I came to find that many people had met outside of the chat, and probably knew each other on a more personal level.  These people are not all too interested in meeting someone new.  They also probably aren’t interested in meeting me because my chat name isn’t something like “cutiesexxiibabii384.”

Many people in the chats throw around terms that I am not yet familiar with, but I do plan to do more research.  People ask me to “C2C” or “PVT” and each time I decline because I still do not know what that means!

I will definitely figure it out soon and delve deeper into chat hour.

For my practicum project, I had to partake in some sort of chat room with tweens.  Tweens (according to Wikipedia) is the stage between middle childhood and adolescence in human development.  Firstly, I searched “tween chat rooms” on Google, and chose the first or second link offered.  This took me to a site titled “Chathour.”

Being that Chathour came up on my search engine under “tween chat rooms” I assumed it was specifically designed for tweens.  I of course am not a tween, let alone a teen, so I decided to make myself a 13-year-old girl.  Little did I know, you could be of any age to register on this site.

The site is fairly plain with amateur graphics and design.  The main colors are green and black, and the profiles are slightly reminiscent of Myspace.  Upon entering the site you are brought to a general chat room titled “weirdtown.”  Being that I was unsure of how to enter other chats, I remained in the “weirdtown” chat and tried to do some research.  I consistently attempted to write in the chat things like “hey I’m new here, can anyone tell me how to work this” or “how does this site work? im new!” Every time without fail no one would acknowledge my request for more information, and I would likely get a reply from a disgusting older man asking if I wanted to video chat.

Next time I plan to enter different chats and see if other rooms are more likely to help me out with getting acquainted with the site.

I chose to check out Chatroulette for this blog post since I have been on the site before.  The last time and the only time that I was on the site, was about two years ago with my roommates freshman year.

Seeing the site again made me realize why I never went back.  The whole prospect of chatting with someone/seeing people that you do not know creeps me out.  I get the appeal of meeting interesting (mostly strange) new people, but for me, it just made me uneasy.  Being that the first time I visited the site I was unfortunate enough to have an older man flash my friends and I, I was actually pretty nervous that I would see something inappropriate again round 2.

Fortunately, this time on Chatroulette I was spared the nudity, and I mostly just had 2 second conversations with other people. It was a very short conversation consisting of “Hi what’s your name” and I surprisingly wasn’t the one who exed out of the chat a lot of the time.  I thought I would experience creepy groups of people and immediately get turned off from the chat, but they seemed to be turned off from me.  Perhaps once they saw that I wasn’t a group of guys throwing back some beers, or a couple of giggling teenage girls, or a perverted older man, they were not very interested in talking to me.

All in all, I do understand the appeal of Chatroulette as a one-time deal, just to see what all the hype is about.  But as far as being a persistent user of the site, I’m not sure I could handle that.  The site was probably intended for g-rated content, and meeting new people through a different means than what was previous available on the internet.  Unfortunately, it has gone to a different, sometimes r-rated, creepy place.  I do not intend to return!

Hi everyone, my name is Michelle Kresch and I’m a junior majoring in Communication Arts.  I’m from Hewlett, New York and I love NYC (I love Madison, too!) I enjoy watching TV, facebook/twitter (obviously), and being with my family.  Being that our generation is one of the last generations that will remember what life was like without the internet and advanced technology, I am looking forward to learning about the social impact of the internet, and what’s in store for the future.

Hi everyone, my name is Michelle Kresch and I’m a junior majoring in Communication Arts.  I’m from Hewlett, New York and I love NYC (I love Madison, too!) I enjoy watching TV, facebook/twitter (obviously), and being with my family.  Being that our generation is one of the last generations that will remember what life was like without the internet and advanced technology, I am looking forward to learning about the social impact of the internet, and what’s in store for the future. 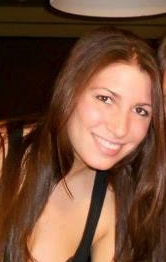 History of the Internet

Much like everyone else, I found it a little hard to keep up with the intricate details/descriptions regarding the formation of the internet.  Being that I am so not a science person, I also struggled with the science-y terminology used throughout the clip.  I did, however, find it interesting that this type of technology was initially created in response to international threat.  In an attempt to get the upper-hand on developing technology, the US tried to one-up these other countries, which is amusing because we (the US) are still technologically competitive today.  Its unbelievable that the internet that we know, stemmed from an unrecognizable something that was developed almost 50 years ago.  It is also amazing that something as complex as the internet is taken for granted every day.